This research analyzes the characteristics of the production and processing of oil, condensates and natural gas in the Republic of Croatia starting from 2000, until the end of 2014. Amounts of balance sheet (exploitable) reserves of oil and condensates ranges from 9330,92 × 103 m3 in 2005, to 13 471,08 × 103 m3 in 2013, while extracted amounts are gradually declining from 1332,61 × 103 m3 to 639,96 × 103 m3. The ratio of extracted amounts and reserves is gradually declining, meaning that a slight increase in reserves does not affect the extracted amounts.  Exploitable reserves of natural gas during the observed period fluctuate greatly. Being peaked in 2007, at 40,919.70 × 106 m3, they reached a low in 2014, at 17,932.98 × 106 m3. Unlike liquid hydrocarbons, the ratio of extracted and exploitable amounts is growing and peaked in 2014. Overall energy demands for oil in Croatia (shown as total consumption of crude oil) amounted to 3032,8 × 103 m3 in 2013, while demands for natural gas amounted to 2809,90 × 106 m3. It is interesting to note that the consumption of oil is rapidly declining, which is a favorable trend from the standpoint of reducing emissions of greenhouse gases. While needs are partly covered by domestic exploitation, the dependence on imports of oil and natural gas is still evident and ranges from 75% to 84% for oil and 28% to 46% for natural gas, without major changes to the trend. The amounts of processed hydrocarbons are declining gradually, especially motor gasoline and fuel oil, while diesel fuel amounts remain mostly the same. Further research as well as development of the exploitation of oil and natural gas is of paramount importance, especially by investing in cadre education and new technologies. 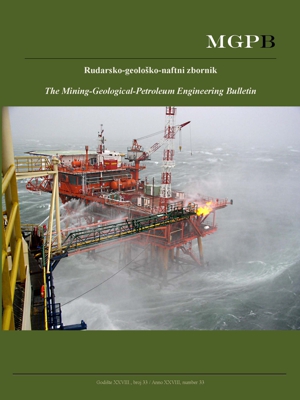 Authors who publish with this journal agree to the following terms:

In agreeing this form, you certify that:

You retain copyright in your submitted work, according to journal license policy (CC-BY). By signing this form you agree that RGN zbornik may publish it under the publication licence. In summary the licence allows the following:

Under the following conditions:

Exceptions to the licence

In addition to publishing the work printed under the above licence, RGN zbornik will also enable the work to be visible online.

The journal editorial can change the licence rules anytime but it cannot retroactively restrict author(s) rights.